How to make colored bath bombs?

Winter is coming – and bringing with it a host of other things: snow, boots, snow, red noses, snow, the holiday season, snow… That’s right: snow and cold will soon be a big part of our lives – and we’ll all be looking for the same thing: warmth! So we got to thinking – how does a long hot bath with a festive, fizzy snowball sound?

You generally need to add a little moisture to ensure the mixture clumps together (Psssssssst! Psssssssst!). But this must be done slowly and carefully to make sure you add just enough liquid without setting off the fizz reaction! There’s really no way around it: the secret to making a good bath bomb is practice. But bath bombs are really fun to use and make great gifts. So we decided we weren’t going to let the need to add water spoil our fun, and we discovered that it’s possible to replace the water and the moisture-containing ingredients with a mixture of vegetable oils and butters. These ingredients moisten the mixture without making it fizz while leaving your skin soft and moisturized!

Below, we’ll share an innovative way to colour them.

To get that fantastic fizz, you need two basic ingredients:

You can also add a small amount of binding agent – a fine powder that helps bind the citric acid to the coarser-grained baking soda:

Instead of water, we use a mixture of butter and oil. Kokum butter is drier to the touch than other butters and keeps well, and jojoba oil is easily absorbed and has a long shelf life. They are thus the ideal emollients for making bath bombs. The melted butter facilitates moulding. Ideally, use a mixture of equal parts of the two emollients.

Essential oils and aromatic essences are perfect for scenting bath bombs. The oil-based emollients added to this recipe serve to dilute the essential oils, which could irritate your skin if they were added alone to the basic ingredients. So let your creativity run wild! Just be careful when adding cinnamon, black pepper, camphor, ginger, and peppermint essential oils. Your recipe should not include more than 0.5% of these ingredients. Don’t use them at all if you have sensitive skin.

Colours are fun, but:

So here’s an even better idea! What if you added multi-coloured confetti to personalize your bath bombs without staining the tub?

Here’s the deal. You colour a certain quantity of glycerin soap (transparent or opaque) with a liquid colorant for glycerin soap. We suggest using intensity level 6 (dark) on our colour intensity scale for glycerin soap. We made seven unscented soaps with all the colours we had in-store. When the bars hardened, we grated them, placing each colour in a separate resealable bag. When it came time to colour our bath bombs, we used colours that suited the scents we chose: mauve and blue for a lavender bath bomb, red and green for a fir bomb, yellow and red for a cherry and almond bomb, and multicoloured for an extra-festive bomb! 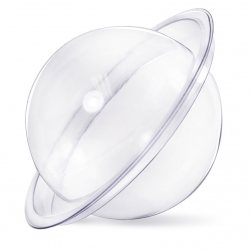 – approximately 250 g of the mixture for a large mould

– approximately 75 g of the mixture for a small mould 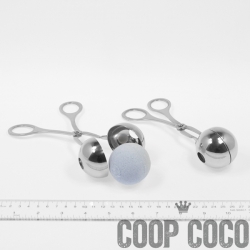 For our scissor-type moulds, use:

– approximately 75 g for the large on

– approximately 50 g for the small one

Prepare the soap confetti (may be done in advance)

Place in the moulds

Results of our experiments

To satisfy our own curiosity, after testing our bath bomb formula, we decided to run some additional tests. Here’s what we discovered!

What to do with leftovers or “less than successful” attempts

The world of home-made cosmetics is extraordinary, but we often have questions that can only be answered through trial and error. Failed recipes can be great learning experiences, but we hate to waste ingredients and often look for ways to make the most of them. In this case, we rescued failed recipes in the following ways:

Enjoy a Natural Fizz with these easy homemade bath bombs